Summary
I propose launching a Vault that would automate the compounding of TORN rewards generated by TORN stake deposited to tornado.cash governance staking contract. For the first month fee of this product should be zero; after a month of operation, the community should negotiate on fee size.

PowerAgent will perform automation for this Vault with parameters defined as a result of the modeling.

Introduction
Some time ago, Torando.cash DAO significantly updated the economic mechanics of the protocol. Before this update, there was no protocol fee charged from Relayers - essential agents executing asset withdrawals from pools and preserving users’ anonymity. The update introduced the protocol fee (0.3%) charged from Relayers and deposited into the Governance Staking contract. Fees proceeds are distributed between TORN stakers in the Governance Staking contract according to the share of their stake in overall stakes.

The mentioned protocol update added an opportunity for TORN holders to earn a share of protocol fees. It drastically improved the utility and value proposition of the TORN token by adding a new Value Capturing mechanism* to the token design.

The user experience of TORN Governance Staking requires executing harvest operation and re-staking TORN for compounding to maximize yield. Note, that fee accural by Governance Staking contract is stochastic process depending on withdrawal activity. It means that nobody could exactly predict amount of TORN charged and distributed between stakers: 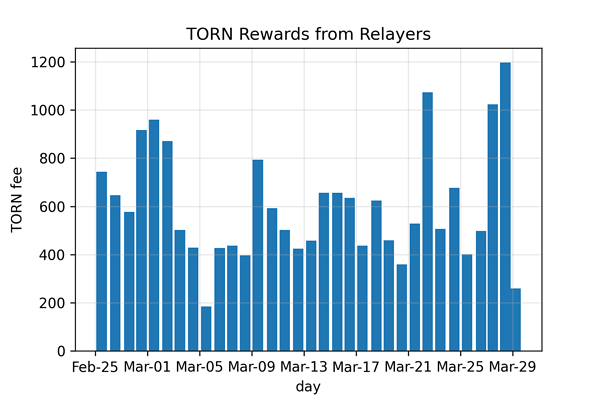 Manual harvesting activity costs time, gas, and effort. It can be reliably automated using the PowerAgent network, while gas costs can be split between users by applying a small fee.

It looks reasonable to create a TORN Vault that would benefit several tornado.cash protocol and PowerPool at the same time. It would:

(1) provide additional value for TORN holders by saving them gas costs, time and generating bigger APY since the stake will be automatically compounded
(2) act as a yield-generating building block for PowerPool products such as ETF-like indices
(3) add value to PowerPool DAO by increasing brand awareness, community and generating fees for the treasury

The benefits for PowerPool
For the PowerPool DAO, we have several essential metrics of a possible product: (1) TVL (2) possible number of unique users (3) possible fees accrual for the treasury. The Governance Staking contract now holds 551k TORN; total circulating supply is around 1.75m tokens. This Vault will get a share of this 551k staked since it simplifies the user experience, eliminates gas costs, and increases yield.

I think that PowerPool possible can attract 200-300k TORNs that are not staked yet. I assume that we can achieve at least 350k TORN - $15m TVL for this product.

Necessary technical efforts
The creation of such Vault can be done fast and efficiently by the PowerPool tech team since it leverages already developed PowerPool products such as PowerAgent and codebase.

Preliminary research
The PowerPool Research team collected on-chain data covering timeframe when Relayers’ fee was activated and modeled optimal hypothetical TORN Vault operation conditions. It was done to back this proposal and Vault development by numbers.

The main parameter that we aimed to optimize was the frequency of harvesting operations. We present only selected results here. Other results will be published soon in a special article devoted to TORN simulations. 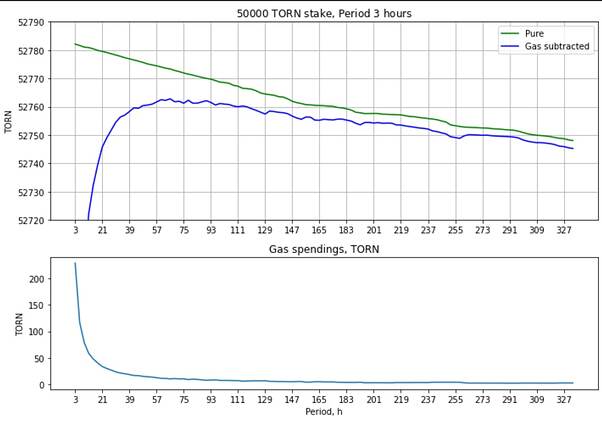 From figure 2 we can observe that the optimal time for harvest considering gas costs and profitability is every ~57-75 hrs (maximum of the blue line). Visualizing Vaults balance vs. performed harvest operations additionally proves that too frequent harvests lead to losses: 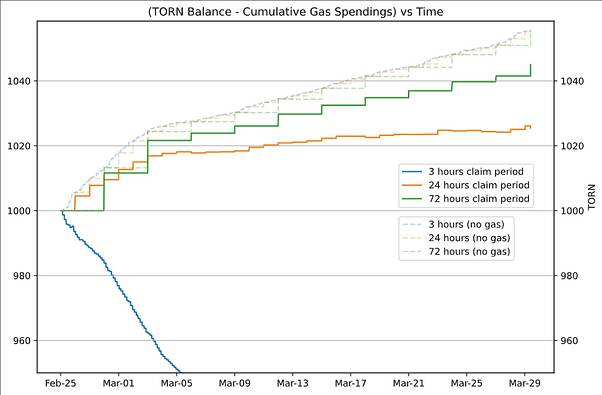 1280×839 69.1 KB
Fig 3. Evolution of gas-adjusted TORN Vault balance in time. Gas adjusted means that amount of paid gas is substracted from Vault balance according to TORN/ETH exchange rate and historical gas cost at the moment of harvest. 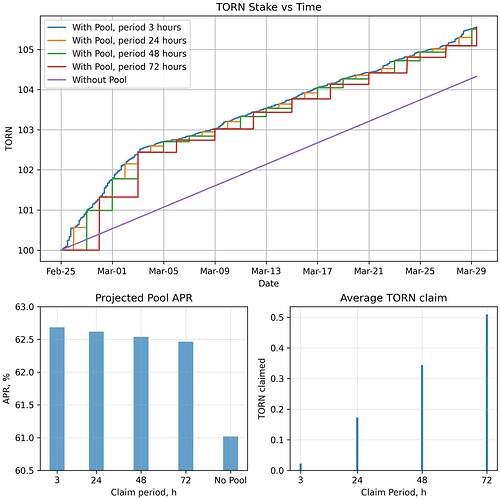 APY difference can be much more significant over a long time frame based on compounding interest.

Specification of proposed product
I propose to launch a Vault that will stake TORN tokens in Tornado.cash Governance Staking contract and harvesting TORN rewards on schedule. The technical team will define the optimal timeframe for harvesting using Python simulations scripts and available on-chain data.

In addition, I propose to set PowerPool DAO fee as zero for the first month of operation. The community should evaluate metrics of this product such as TVL, number of unique wallets interacted with contracts, number of regular users, and PowerAgent gas spent within a month. After the first month passes, I suggest creating a proposal to update the protocol fee parameter.

*Value capturing mechanism classification was developed by Vasily Sumanov, Head of Research in PowerPool. It is a tool for understanding tokens’ value by decomposing them into elementary economic patterns.

Thanks Vasily for the excellent overview. The relationship with Tornado.Cash is a very good opportunity to develop, test and audit/stress test the newest PowerPool vault code, and also begin to diversify the sources/use cases for the PowerAgent Network. Marketing/publicity by Tornado.Cash to their own user base/stakers to the effect that the vault is ‘powered by PowerPool’ is consistent with the strategy of allowing external managers to specify pooled investment baskets, in this case just 100% staked $TORN. It is a good next step.

I support this proposal. The idea is great, new partnerships will definitely benefit PowerPool!

Thanks for sharing. Do we have an estimated date for launching the pool?

In coming days, wait for the accouncements!