I exported the state of the current wallet balances from Etherscan and thought I would share some observations. This data-set excludes the largest wallet (which seems to be held by the CVP team for distributing). As of writing this, there are 3697 address who hold a combined 5,160,022 tokens between them. This makes me think some of the alpha testers have sold their assets. We will shortly see why. But to begin with, these are the largest wallets in CVP today. Barely six of them with any meaningful holding outside the team’s wallet 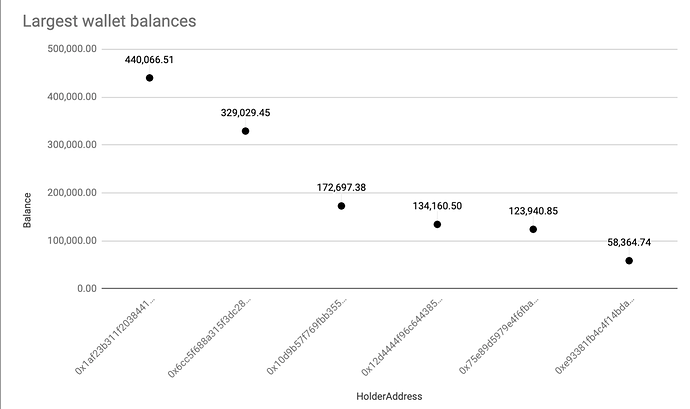 Now if we exclude those large wallets and see how many people hold tokens in the 10k-100k range, we will see that a number of alpha testers have likely cashed in their tokens (their choice) - but there are 42 addresses with around 50k tokens each. The rest of the count is quite small which makes me think whale concentration in CVP is quite low as of today 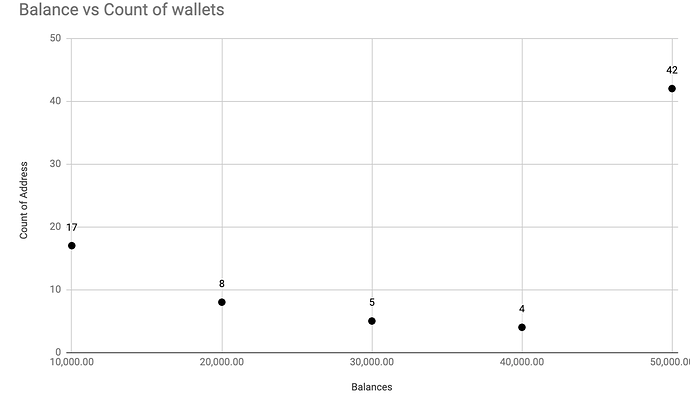 Having that said - it seems like there is a very large base of LPs on the network today. There are over 2266 addresses that hold less than 100 tokens. When we consider the numbers between balances of 100-1000, you can see that a number of large whales have already been mining on the network (or buying and holding) 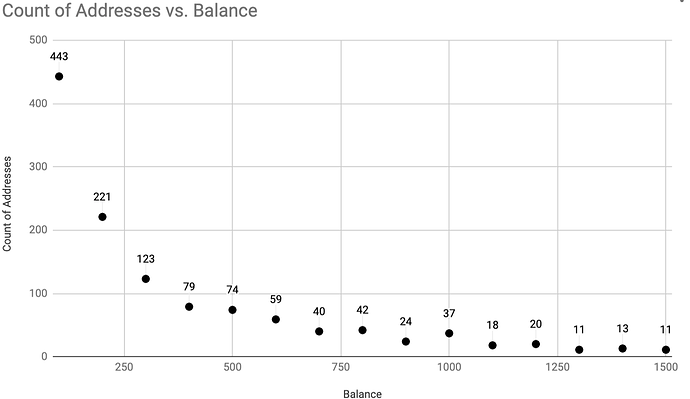 I understand this is not exactly much data. One way to go deeper is to study the on-chain transactions and get an idea of what is going on. Happy to do it if there is interest in that kind of analysis. But my key take aways are

Exciting to see what lies ahead.

The largest wallets seem to be CEX wallets, isn’t it?

Good one. Yes it seems like they are all exchange wallets.
Sell-side liquidity crisis something something…

what do you mean talking about a “sell-side liquidity crisis”?

My apologies for the low quality post.
What I mean is it seems there’s sub 1mil tokens (or ~$3 million in current prices) on exchanges for large whales to buy and hodl. In times of high demand and low token supply, it is possible that the price shoots back up to $15-$17 range in no time. One reason this could happen is if the TVL surges and the fair value of governance of combined underlying networks becomes higher than the price of the asset itself (ie - mcap of float of cvp < mcap of value of combined governnce on multiple projects.).

Tl:Dr- too little supply on exchanges to meet pent up demand once industry notices what cvp can do.

Interesting analysis. yeah, looks really undervalued, and this new pp index idea is very promising this make me think that the founders have deep expertise, some of their articles were written like academic documents.

Let’s see man what they will deliver. Articles are written good and very professionally, but only the working code can be an indicator of team expertise. Faces, articles, talks don’t work. Only code and working product in mainnet

They deliver the tech very fast, I don’t think that it will be any problems. I had an internal talk with some members of matic team and they were very excited about pp dev team

@boop Thanks for the great analysis!

As I understand ~10 mn CVPs which are to be distributed to betas and gammas are not yet included though.

This will affect the picture dramatically.

Yep, thats the largest price risk today. I think these can be mitigated with more exchange listings (likely) and TVL skyrocketing through product functionality. At ~50k502 = we are expecting ~5mil or ~$12mil worth sell side pressure. Not much if you consider the state of the markets now.

I will re-do this a few days after mainnet launch so we can capture user behavior then.

great work man. Analyzing the on-chain transactions would be really helpful as that’ determine what the other 58 alpha testers have done with their stake, as in, who’s LPing and who actually sold